Mario Party 9 is an interactive board game that can be played on the Wii with up to four players. It includes more than 80 brand new and creative mini-games. Plus, the game is loaded with new game boards that lead to boss battles for the first-time ever! This game also takes a unique twist over previous versions of Mario Party as all players ride together around the board with each player taking a turn as the “captain” driving the special vehicle for the level across the game board. Each of the different worlds available have different paths you can choose for even more variety to your game play. Throughout the game you compete to collect ministars and beat the mini games to become the win the game. Party points are earned at the end of each game completed that can be used to unlock special features and items to add to the game play. 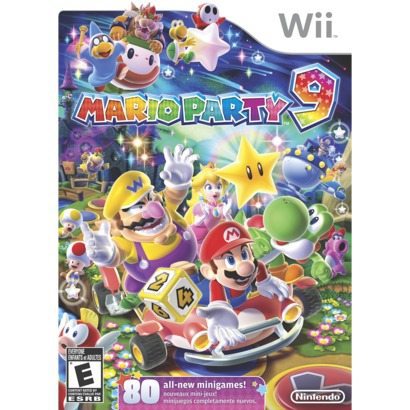 We’ve had a blast playing Mario Party 9! My 5 year old loves playing games on the Wii and all things Mario so he couldn’t wait to play! Some of the mini-games were a bit challenging the first time or two through them but he’s been able to grasp how to play most of the mini-games now and does a good job competing! My favorite mini game we’ve come across so far is the Rock Climbing game. You have to press the key indicated by each rock to advance on to that rock. I thought the setup of the game was clever and fit its theme well. It reminded me a bit of a Rock Band type of game play but you race to be as fast as you can so you reach the top of the cliff first. The boards do contain a level of chance to them so it is not all skill based, but that seems help level out the skills a little bit so those who never win the mini games can still have a chance in the game. We thought the boss battles were neat to make it feel a bit more like the traditional Mario level games but they didn’t feel extremely challenging.

When you’re looking for something fun to do this summer, Mario Party 9 would be a great game to add to your collection! Mario Party 9 retails for $49.99 and is available in stores locally as well as on Amazon.

Disclosure: I received a copy of Mario Party 9 for the Wii in exchange for my honest review. I was not compensated in any other manner. The opinions expressed above are my own and any claims should be verified on the sponsor’s site.

i think that my nephews would like this game. thanks for the review.

I love mario party, it is awesome to see they have another one out

This sounds perfect for the grandkids and I like that they take turns.