Mickey is back in the video game world with a whole new adventure in Disney Epic Mickey 2: The Power of Two! Now, you can play an all new co-op adventure with Mickey and Oswald as they battle to save the magical world of Wasteland. Throughout the game you’ll find favorite and forgotten Disney characters and theme park attractions from across 80 years of Disney history including Oswald the Lucky Rabbit (Walt Disney’s first cartoon star) as your sidekick! Mickey continues the use of his powerful paint brush and paint thinner while Oswald takes control of a powerful remote that lets him command electricity.

My husband and I love games that can be played with two players in a co-op mode but that also allows one of us to drop out, when needed. This lets us play together and enjoy time together, but doesn’t require us both to always sit together to play to continue our game. Since it can be a difficult task with young children in the home to find a lot of free time to play together, it really works well for us to have the co-op mode that is not dependent on two players. Now, my oldest is finally old enough to start joining on on the gameplay and this was the perfect game to introduce as a co-op game. Some of the puzzles in the game are still too hard for him to play independently, but he did a really great job following along and even suggesting things we could try. This game has been so fun to play together with my six year old! I really enjoy how Epic Mickey 2 gives you the chance to choose your own paths in the game and the different consequences and way the story moves based on some of those choice that are made. It’s fun to see how the game can progress based on my decisions. I also like how there are lots of side quests and missions you can work towards which gives this game a lot of depth and story. I also really appreciated that Epic Mickey 2 was a lot less dark and dreary as the original game and includes so many familiar places and scenes that I feel like I’m immersed right into the world of Disney. 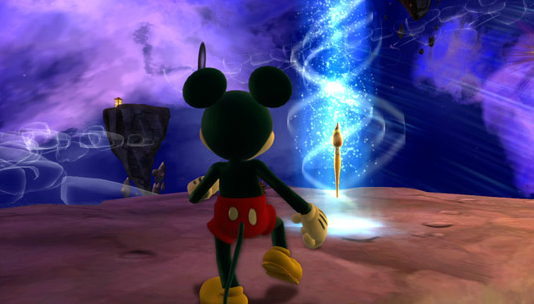 Disney Epic Mickey 2: The Power of Two is available for your PC, Nintendo Wii, Nintendo 3DS, Nintendo Wii U, XBOX 360, Sony PlayStation 3 and PlayStation Move systems. The retail price ranges from $39.99 to $59.99 depending on the system.

Disclosure: This post is sponsored by Disney’s Epic Mickey 2: The Power of Two the video game.

great review, we will have to check this game out thanks

I'm glad to hear it isn't as dark as the first one... I was really surprised by that.

a great game for the kids

my daughter would love this-the awesome graphics and anything Disney!

I know my daughter would love this, and the coop seals the deal.