I’m one of those people that spend hours scrubbing my dishes to be sure they are extra clean before they even make it into the dish washer. I had thought we just had a crummy dishwasher that didn’t do much more than spray some hot water and sanitize the dishes so I always have spent hours scrubbing dishes. I worry about random food particles washing about my machine leaving a dirty load of dishes. I was able to try OxiClean’s Dishwashing Booster that improves your dishwasher’s ability to remove food particles, cloudy film, and spots/streaks. I knew it was time to let down my guard and give the Dishwashing Booster a chance to see how it would do wouldn’t spending all the time I usually do scrubbing my dishes. We had dinner of Spaghetti and Meatballs and I left out all the dirty dishes over night to really add to my test. Then, in the morning I loaded up the dish washer with all the dirty dishes from dinner including a sauce covered pan, bowls and dirty cups. I didn’t leave any remaining noodles or meatballs, just what was left on the bowls after scraping the majority of any food scraps into the trash. It was extremely nice to spend all of about 5 minutes doing my dishes in the morning, just a quick task to load up the dishwasher and it was ready to go! That job would have easily taken me over 30 minutes in my normal routine of scrubbing and washing all the dishes before loading them up.

When the dishes finished washing I was really interested to find that my glasses dishes really did have less of a film look, which is usually especially left at the bottoms of my upside down cups. I also was surprised they for the most part my dishes were extremely clean! I did see two of my kids bowls with a few small particles of food still remaining, which I will just run through a second load. I have to say, I think I’m converted! Had I washed the load immediately after dinner, I don’t think I would have seen any remaining mess at all, which would be simple to do with such a smaller time commitment needed to “wash” a full load of dishes if I can skip the manual hand washing step! My area also is known for hard water and the OxiClean Dishwashing Booster seemed to really help there as well to make my current detergent more effective and keep the cloudy film at bay. Plus, adding the Dishwashing Booster really was easy as it works right as a part of my dishwasher’s system and just needs to be refilled on occasion when the solution runs out. The Diswashing Booster didn’t do a perfect job, as I did still see a few small spots on clear and glasses dishes, but it has vastly improved my overall washing experience and dish cleanliness! 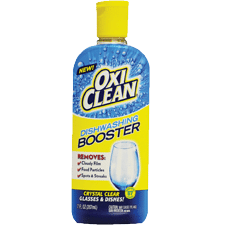 OxiClean Dishwashing Booster works by making up the difference that is lacking in your dishwashing detergent. In 2010, phosphates were banned requiring dishwasher detergents to create new formulas. Since then, many consumers have found that their dishes just aren’t as clean as they used to be and aren’t sure how to battle some common problems. The multi-action formula in OxiClean Dishwashing Booster dissolves the cloudy film caused by hard water salts and calcium carbonate which can built up during the rinse cycle. Here are some interesting statistics about others experience with dishwashing frustrations and their reaction to common problems:

OxiClean Dishwashing Booster is available in a 7oz or 13oz bottle. The 13oz bottle will last for up to 125 wash loads and is available in local food, drug and mass retailers for $6.99 to $7.99 SRP. To learn more about OxiClean and their formula check out the OxiClean website!

I wrote this review while participating in a blog tour by Mom Central Consulting on behalf of OxiClean and received a product sample and serving tray to facilitate my review, and a promotional item to thank me for taking the time to participate.

I def need to try this!!! I hate having to prewash my dishes to put them in the dishwasher!!

Great review!  I would have gone crazy knowing the dirty dishes were sitting out overnight but that was a real life test.  I also have really hard water so it's good to know there's a product that can help.

I didn't know how well this stuff would work so I kept putting off buying some to try out. Thanks for the review! Now I guess I have no excuse not to buy some! LOL

I was wondering about this,,havent used it before an was considering trying it,,thanks for the info