It is always so fun when the Olympics come around again and we get to watch amazing athletes as they compete. I’m always amazed at how these athletes train so hard and how fractions of a second can literally be the difference between a world record, gold medal, and/or first place. I remember watching and cheering for Team USA back on 2008 with Ryan Phelps took home an amazing 8 medals and was a superstar of the event.

The USA Swimming Team for the 2012 London Olympics have been competing to form the official team all this week. The Swim Trials will continue through Monday, July 2nd. It has been fun to watch as the team is literally being formed and great swimmers are brought to America’s attention. One swimming star in particular has really stood out to me – Missy Franklin.

Have you heard of Missy Franklin? This teen is competing to be on the USA Olympic Swimming Team. She started swimming young and swam with her city’s swim team, the “Heritage Green Gators” at just 5. She broke her first world record at age 16  She has lead the pack in the semi-finals and I’m excited to see if she makes the cut in the Women’s 100m Backstroke during tonight’s Swimming Finals for that event! Anyone can get started, at any age, by joining your own local swimming team or starting with swimming lessons. USA Swimming has a great informational website packed with information on how you too can get started swimming! 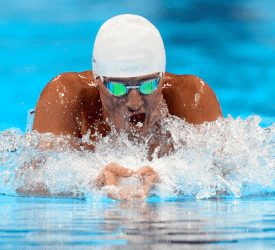 Other big names include Michael Phelps and Ryan Lochte who battled for first and second in the Men’s 400 IM event finals to join the Olympic Team. Phelps has joined the USA Olympic Team for his 4th time and took second place in the finals, just behind Lochte. Elizabeth Beisel joins the women’s USA Olympic Team by winning the 400 individual medley finals. You can watch the swim trials yourself on NBC.

The National Governing Body for the sport of swimming, USA Swimming, has launched a website packed with helpful information to help those who want to start swimming find out how! Locate a swimming club, league, or lessons and find out where to beginning. Whether you are just starting out in swimming or would love to train in swimming for fitness or competitions, SwimToday.org has information to help you get started! While the stars compete in the 2012 London Olympics this year, you too can be in the water swimming and keeping yourself healthy and well. Find a club near you today to start for yourself or your children.

Disclosure: I will receive a stipend for participating in this blogging campaign with TheMotherhood. Opinions expressed above are my own.

So Excited , Swimming is my favorite olympic event!!!!:) @reinaheather:twitter

I'll be joining the chat :) @jeevonkay:twitter