I received compensation for this post. All opinions are my own.

If your kids are anything like mine, you’ve watched Frozen countless times. You can probably quote the entire movie and the songs play on repeat in your mind if they ever get mentioned. I actually really like the movie Frozen. However, I totally get that the movie is really cheesy at parts and even unrealistic.

ThemeParkHD YouTube channel is known for it’s point of view videos of popular theme park rides. They’ve also created a really clever parody take on Frozen. This video, The Real Frozen, sums up Frozen in a way that adults can appreciate! 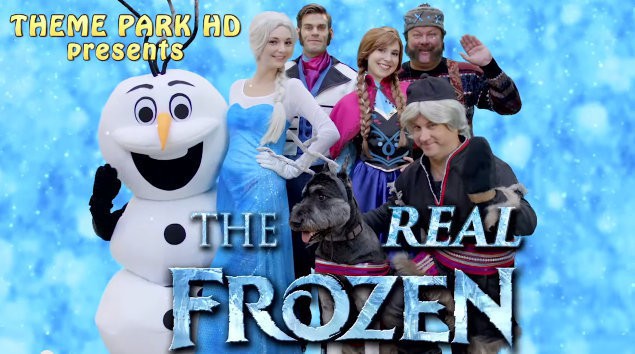 Hans is totally my favorite from the skit – they play him just like he is! The Anna character was great, too! They nailed the clip — their versions of the characters where right on tune from an adult’s perspective. There was some clever jokes I was laughing at throughout the skit. Check out this short 5-minute clip and then if you liked it, share it!

My favorite line from the skit just might be from Oaken. My kids would totally dig this joke, too:

Head over to watch The Real Frozen on YouTube and leave your comments and thumbs up to support their channel. The more likes and comments, the quicker ThemeParkHD will share their next video.

What was your favorite part of The Real Frozen parody?

I have to see the Frozen movie. But I have a friend that owns the movie so I am planning a playdate to see if with my kids.

LOVE it! So much Frozen stuff... it is everywhere.

This looks totally cute. I could use a good laugh!!

So awesome! Anything frozen we all love so much!

Haha, how come I've never heard or seen of this before. I can't wait to check it out.