Synopsis: As a warrior lost on Earth, John Carter is magically transported to Mars, where the fate of the planet and its people ultimately rest in his hands. With surprising new powers, and epic battles, he rises to become the man he is meant to be and the hero he truly is.

I was able to review a copy of “John Carter”. I love westerns and movies where someone travels to the future. I like the feeling of exploring something extremely unfamiliar and advanced. The movie started off giving me that feeling. However, I thought that the story left something to be desired. John Carter was teleported to Mars by an advanced alien called a Thern on accident when he killed one in a cave. Mars was in the midst of a civil war and the Therns were attempting to make certain that the war ended in the manner that they wanted to further their purposes. John Carter gained an advantage on Mars because of the lower gravity which made him stronger than everyone else. He could jump higher, punch harder, etc. Because of his abilities he was all the sudden god-like and could fight off hundreds of enemies and pretty much couldn’t be defeated. I found this to be a little annoying and made the whole movie very predictable. The story line was decent and if you’re not paying attention the ending might catch you off guard. The animations were very good and fun to watch and would recommend this movie to anyone looking for a decent rental. 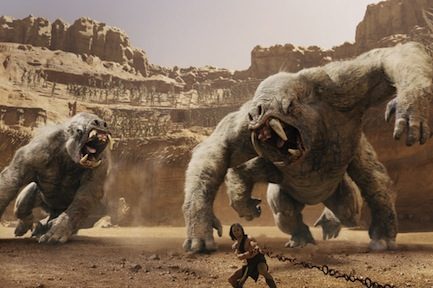 What to know some crazy facts about John Carter? Get this: Lynn Collins, who plays the warrior princess Dejah in John Carter, spent up to 5 hours in the makeup chair every day to be prepped for her role! Another interesting makeup fact, actor Dominic West, who played Martian character Sab Than, reveals that “After spending three months covered in tattoos, they were incredibly tough to scrub away, so I let them fade naturally. My kids thought it was ridiculous when they spotted them on my arms and legs weeks after we’d finished shooting the movie!”

Check out the John Carter Trailer!

John Carter was released on June 5th and is available in stores locally as was as your favorite online retailers including Amazon. It is available for purchase as a Blu-ray Combo Pack, Blu-ray 3D, HD Digital, DVD, or On-Demand.

Disclosure: I received a copy of John Carter in exchange for my honest review. I was not compensated in any other manner. The opinions expressed above are my own and any claims should be verified on the sponsor’s site.

So excited to see this!!

I'm glad to hear your review.  I already heard somewhere it wasn't the best movie, and now I'm glad you were able to explain further why it didn't do so well in the box office.  Thanks for the information!