How to Make an Igloo

Home » Activities with Kids » How to Make an Igloo

This winter, we had a good 8” of snow drop and close down town for a couple of days. It was our boys first time to play in the snow from their home, having recently moved from Phoenix where we never got to experience snow at home. We talked about all the ways we could play in the snow and after some sledding and snow angels, we decided it build an igloo from snow.

How to Build an Igloo

Project Time: About 6 hours with 2 adults

Start by assessing the snow you’ll have to work with. If it’s soft and powdery, it won’t pack together well and the snow blocks you create won’t hold up. If the snow is icy, it will be hard to work with and won’t form snow blocks, either. The best snow is the type that will naturally clump together. It will pack and form blocks easily. Typically, this type of snow comes about when snow has had a chance to melt just a little but not get to the ice stage.

Outline the shape and location for your igloo. Make almost a complete circle, leaving room for an opening. Your open will go out a few blocks creating a tunnel entry. 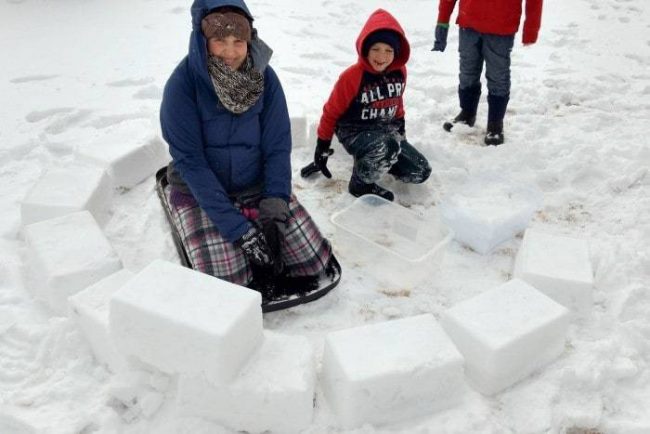 Fill your plastic containers shoveling snow into each tub. Press down on the snow to pack it consistently to create a solid block of snow. 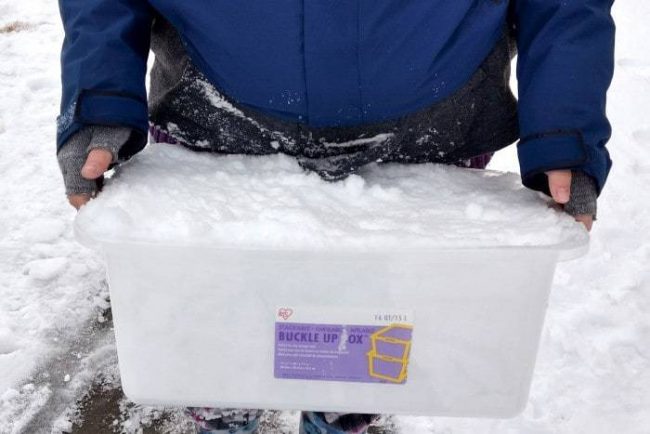 Flip over the container quickly and tap it at the top gently to loosen the snow from the side of the container. You should be able to easily pull the container up and away from your snow block.

Repeat these steps filling your containers, packing the snow in, and then flipping your snow blocks until you’ve lined your outline in snow blocks forming the base layer. 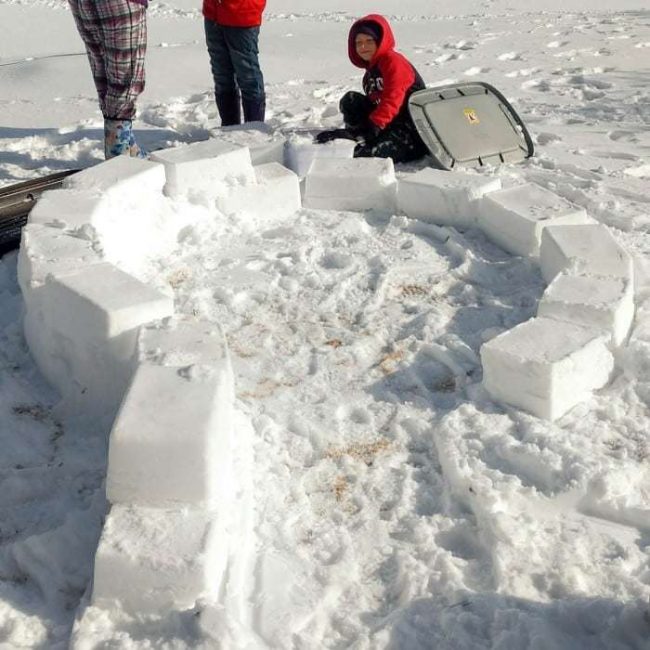 For each next layer you will offset your snow blocks to create a strong design that won’t easily topple. Each new ice block should taper inward towards the center of your igloo’s circle overlapping the blocks beneath it by about 2/3 to ¾ of the block below it, inching your way in towards the center until you’re able to meet and form the bridge at the top creating a ceiling. 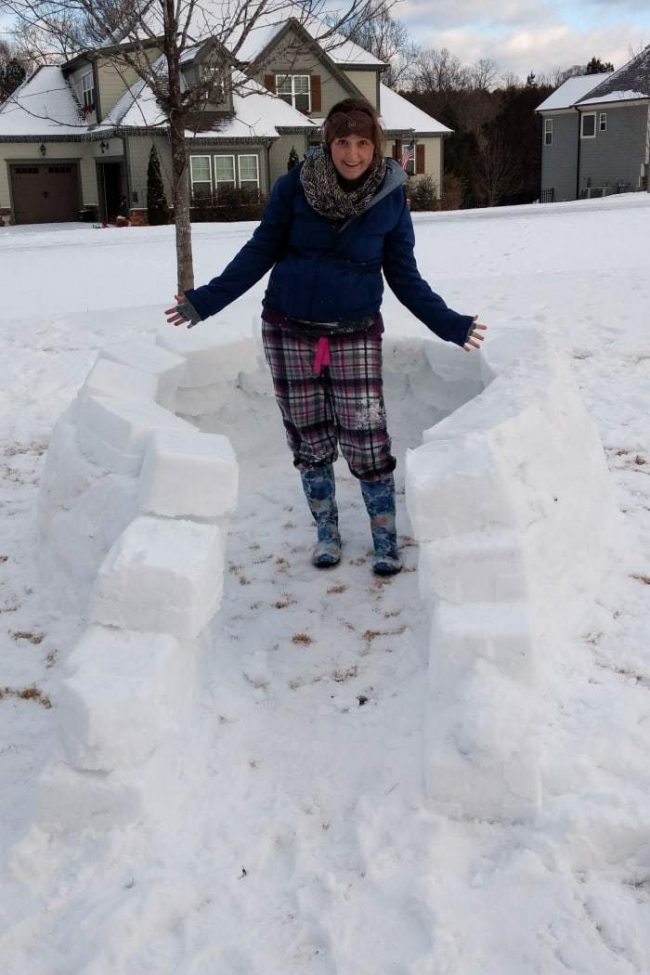 You can use a tarp to kneel on while placing the blocks filling in between the blocks. Or use a tarp to toss over the top if you run out of good packing snow. You can even use it to line your igloo for a fun hangout spot for the kids! We used a big storage tote lid for kneeling on, as it’s what we had.

You can pack snow in between your blocks for an even stronger igloo, it looks really nice too. 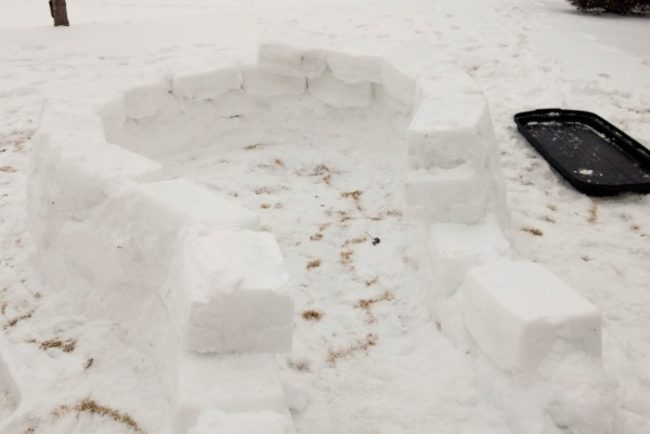 We got started on our igloo mid-afternoon, and only got a couple of hours into the project the first night. By the second day, most of our good packing snow had turned icy. Unfortunately, we ran out of good packing snow from not getting an early enough start the first day. Even with our igloo about 2/3 of the way complete, it was so awesome inside! The neighbor kids and adults all stopped by to check out our creation. It was definitely the highlight of the neighborhood. 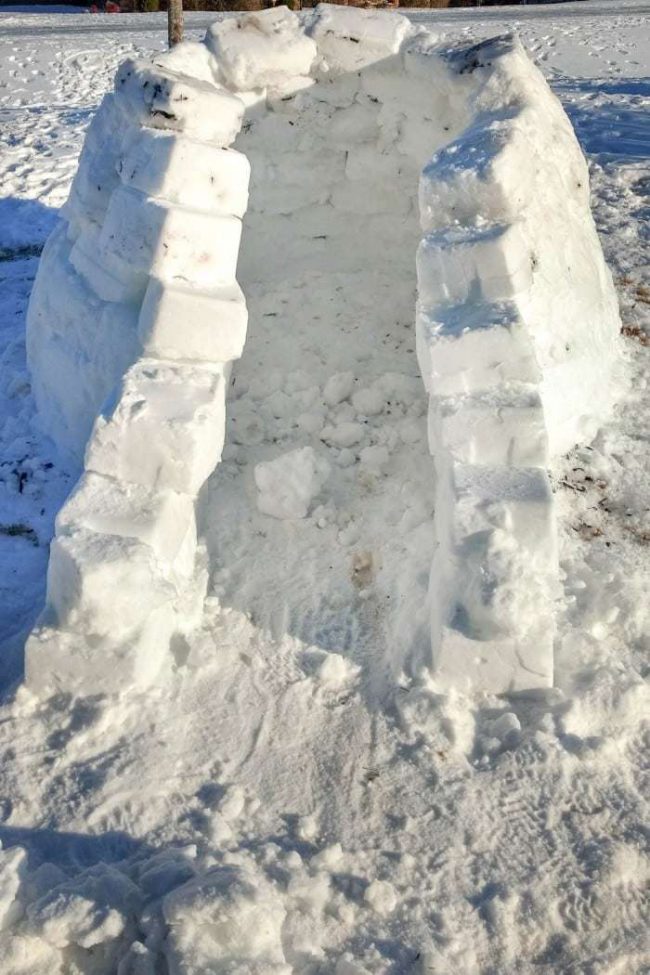 If you don’t complete your igloo, it makes a perfect hideout for an epic snowball fight in the neighborhood. Your snow fort will give you plenty of protection from the snowballs headed your way while you duck and build your own snowballs to throw.

What to do When Your Kids Have Lice
← Previous
Cleaning Shortcuts to Quickly Clean Your Home!
Next →

I really love it so much fun with kids

How fun would this be! We have had plenty of snow this year. The kids would love this.

No kiddos here so my husband and I are the kids and would LOVE doing this! Too bad we didn't get enough snow this year :( Thank you for sharing with us at Funtastic Friday, Janel!

This is a great idea! My kids is going to love doing this!

What fun making in igloo can be. I recall doing this as a child, it was really the highlight of the winter season at times!