If there’s one game our family has changed up to be our own it’s Yahtzee!! We started with the basic way that everyone knows how to play Yahtzee, and it morphed from there. Every time we visit with my husband’s family, endless games of Yahtzee ensue!

We have tons of different Yahtzee variations we’ve come up with over the years and rarely play the classic game anymore. It’s really fun to call it a little bit our own!

Here are the original Yahtzee rules, plus 7 different ways to play Yahtzee! Just grab dice, your score pad, and you’re ready to play!

What You’ll Need to Play Yahtzee:

All players begin by rolling all 5 dice one time. Play will then begin with the player who rolled the highest total sum when you add the number on all 5 dice.

How to Play Yahtzee:

On a players turn, they will roll all five dice together at the same time. After the first roll, the player will try to determine which of the combinations on the score card they would like to try to roll towards using a bit of strategy to pick the best combination to try for based on the odds. Any dice they decide to keep, and not reroll, can be moved to the side.

The player will then reroll as many of the five dice as they would like two additional rolls. Whatever the dice end on at the end of the third time rolling will be what the player must score onto their score card.

You can score your roll in any one box on the score sheet. Each box will have a different point value, depending on the dice roll results. Many of the boxes may even be worth no points at all, if they don’t meet the requirements.

The upper section scores by specific number. For example, if you wanted to score for ones, you could count by 1’s and add up the total of each of the dice that show a 1 result.

If you were scoring the 4’s, you would count by 4’s and add each of the dice that show a 4 result.

If you five rolled dice at the end of your turn showed two 1’s and three 4’s you could score this result as 2 points in the 1’s scoring row or 12 points in the 4 scoring row. In the upper section, you only score the value of each corresponding dice for the row in which you decide to place a score.

A Yahtzee bonus roll can be scored as a successful small straight or large straight and scoring value as applicable for those options will apply. That means you get to score your one roll in two spots on the board – with a check mark in the Yahtzee bonus and in any one other box on the score sheet. 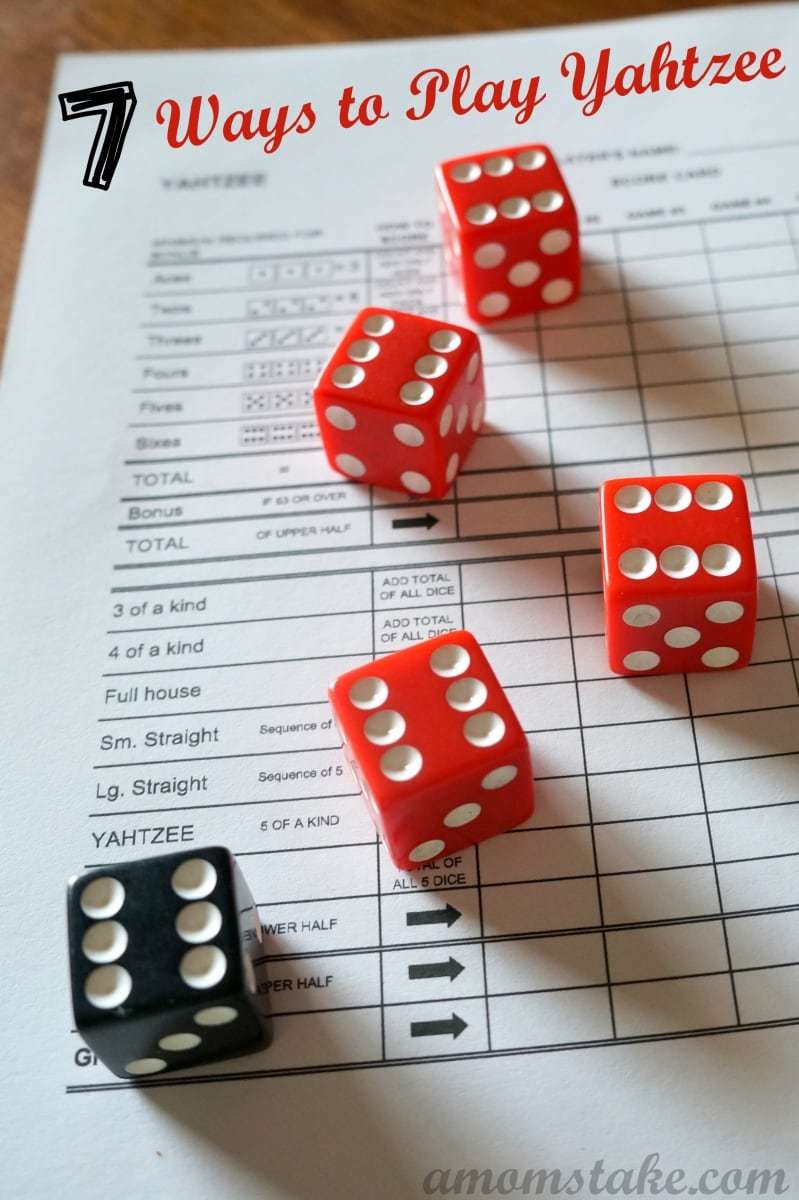 This game you can expect higher scores, and some fun interaction! You each start by rolling a set of 5 dice at the same time, hiding your roll.

Optionally, you may choose to swap exactly two of your rolled dice results, in a clockwise manner with all those who also would like to swap. All players re-roll any number of dice you would like for your second roll.

Now, you may optionally pass exactly one dice from your rolled dice results, in a clockwise manner, with any other players that still want to participate in a swap.

Finally, you get one last roll where all players may roll any number of their dice. Once you choose to opt-out of the swap, you cannot rejoin and swap again for that set of rolls.

Score your final results wherever you would like and then continue with the next roll playing as described.

Quick preview of the Yahtzee variations:

Play Yahtzee with 6 dice, instead of 5. In the end, you will only score 5 of your dice, one being thrown out by your choice from your roll results before scoring.

Add up the total from all six columns to get your final score. This version gives you much more flexibility to spread out bad rolls and score lots of bonus points for those awesome rolls!

All players start by rolling and scoring in the Aces column, working their way down their sheet in a sequential order. You cannot skip a row, even if you have to put a zero score in one of your spots.

This is a fun variation to play with kids especially as it’s easy to tell them exactly what to roll for each turn and what to save.

Include one different looking dice as one of your five dice to play with. You can use a different colored dice, or a smaller dice, or whatever you may have on hand that will help you differentiate and remember which dice is your special dice.

Roll all 5 dice at the beginning of your turn. You must save the special dice and use it as part of your scoring at the end of the round.

For example, if you roll a “3” on your special dice and also roll three “6” results on your dice, the only way to score in your 6’s would be to get a full house or score your results as a 3 or 4 of a kind.

You could not score the dice as 6’s as that would not be including your special dice in the scoring.

This is by far the version we play the most, a family favorite! It’s really not a “fair” game, but really fun for whoever ends up in control of the game and makes rolling quick and easy as you know exactly what to roll for. In control, all players roll a normal turn, trying to get the highest possible chance. No scores are recorded.

The player with the highest total of dice is the starting control player. They begin with the dice and have no restrictions on their roll.

They roll as normal and when they have finished all three rolls, they declare where they would like to score their results. The control player does not record their score yet, but waits for all other players to have a chance to “steal” their roll.

The other players take turns in clockwise order trying to match or beat the roll. If a roll is matched, they get to score the results where the original placement was called.

For example, if the control player rolled three “4’s” and choose to score these in their 4’s column, any other player who also rolls exactly three 4’s would be able to score their roll.

If any player beats the roll by rolling more than is needed to complete the base score achieved by the control player, then the control player scores zero points and the player who beat the score becomes the new control player. They will score their results, even if another player during the same round of play beats their score and steals the control position.

A new “round” begins each time the control player starts to roll a fresh turn and declaring their placement for their results after 3 rolls. You cannot “beat” a score for set score fields such as Full House, Straights, and Yahtzee.

Often, we’ll use a “scratch” a Yahtzee as a safe place to score a poor roll and keep control, assuming none of the other players roll a Yahtzee and steal our control!

This variation speeds up overall game time, but cuts out some of the competition. All players start with a dice or two, divided among the total players. Everyone rolls their selected dice at the same time.

Together, the group decides which dice to save and which to re-roll. Then, at the end of three rolls they collectively score their roll. You can compete as a team to try to get your all-time high group score.

These are just some of the fun Yahtzee variations you could try. If you’ve played Yahtzee a different way, share with us in the comments!

Do you have any other different ways to play Yahtzee?

Instead of playing one game, when you make the score sheet play 3 games at once. For example, in a standard game of Yahtzee, you get three rolls for one number(say you're going for your sixes) and you get 12. Well on your next turn, you can try for your sixes again( if you please.) Example: you get 12 on one turn, 12 on another and 24 on the 3rd column. Each number( 1's, 2's, etc.) Has 3 columns for 3 attempts.

What great variations. I love Yahtzee and played it all the time when I was younger but my kids don't like playing it . I have only played it the original way.

I've never played Yahtzee before! Pretty crazy right? I have to get it now, since there's 7 ways to play it! It would be fun to play with dds and hubs!

Ha! I have a hard time figuring out how to play it...lol, who knew there were so many different ways to play.

How fun! Yahtzee is one of our favorite games, because there aren't a lot of rules to remember, and it helps with basic math skills. Thanks for sharing these great variations.