Disney’s Wreck-It Ralph will be released on DVD and Blu-ray and available for purchase starting tomorrow, March 5th!

From Walt Disney Animation Studios, Wreck-It Ralph takes viewers on a hilarious journey.  For decades, Ralph (voice of John C. Reilly) has played the bad guy in his popular video game. In a bold move, he embarks on an action-packed adventure and sets out to prove to everyone that he is a true hero with a big heart. As he explores exciting new worlds, he teams up with some unlikely new friends including feisty misfit Vanellope von Schweetz (voice of Sarah Silverman). The film is directed by Emmy-winner Rich Moore.

We went as a family to see Wreck-It Ralph in theaters and it was such a fun film and a perfect fit for my little boys that LOVE video games! I remember watching Wreck-It Ralph in theaters and laughing at so many of the jokes that reminded me even of my own days playing video games as a kid. We all enjoyed the movie in theaters but have come to appreciate Wreck-It Ralph even more after being able to watch it a few more times at home. The characters are so loveable and fun to watch. My boys have begun to recognize many of the characters from the movie which has made it fun to be able to bridge the generational gap between their video games and ours. I loved watching the mix of all the different types of animation come together from 8-bit movements and styling to detailed CGI characters in the battle world. My husband and I loved seeing favorite characters from games of the past like Sonic the Hedgehog who was one of my favorites! Wreck-It Ralph includes a lot of humor that only the adults will really get but it is still completely appropriate and enjoyable for kids as well. I really enjoy that animated movies have been including comedy for adults as well to keep the movies fun and entertaining for us, too! If you grew up playing video games, you won’t want to miss Wreck-It Ralph. Or, if you have kids that have a love for games, it’s a perfect and fun title for them too.

I grew with games that played in the 8-bit world so it was really interesting to me to watch that clip and see a bit of the behind the scenes look at how they took their knowledge of graphics and had to adapt their skills back to a more classic feel.

Looking for a fun way to introduce Wreck-It Ralph to your children? You can enjoy these completely free printable activities and games! They include stencils, a paper puzzler, and a paper craft. 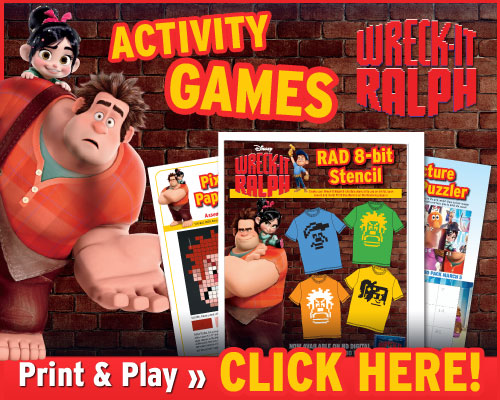 I received product samples and/or compensation in exchange for this post. The opinions expressed above are my own. Any claims should be verified on the sponsor’s site. Wreck-It Ralph movie

This is cute I think!! Thanks for the review of it. I don't think I have heard of it before. I bet it is funny! Thanks for sharing!

I need to get my hands on this movie...I really want to see it with my nephew

I was interested in showing this to my grandson but didn't know too much about it so I was glad to read your review and I think it would be a great movie for us to watch together.

I think we are going to rent this dvdd. It looks like all of our kids will enjoy it!