I received tickets to The Wizard of Oz in exchange for this post. All opinions are my own. 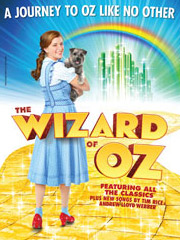 Last night I had the wonderful opportunity to see The Wizard of Oz at ASU Gammage. I am in love with live theater. It is so fun to see all the components come together right in front of your eyes to create an entertaining evening! I must confess that I am not a fan of the movie version of The Wizard of Oz, so I was hesitant going into the show. I’m so glad that I went, because it was so much fun! Much better than the movie in my opinion!

The play itself was amazing. It included everyone’s favorite songs from the classic movie as well as some new numbers. I was so impressed with  Danielle Wade, the actress who starred as Dorothy, she was so fun to watch and had an incredible singing voice! With Toto in hand they totally stole the show. Toto is played by a real dog named Nigel, he was the cutest thing I have ever seen, the audience just adored him!

Her rag tag group of friends in Oz were hilarious.

Glinda the Good Witch was dazzling. Seriously, her dress was so amazing you could not take your eyes off of it.

The Wizard was powerful and the Emerald City sparkled fabulously, and of course The Wicked Witch was as scary as ever.

One of my favorite things about last night was how many kids were in attendance. I am really passionate about introducing kids to theater and other enriching activities at a young age, my kids are still too little, but I can’t wait to take them someday! I bumped into several small Dorothy fans last night, dressed to the nines in their blue plaid and ruby red slippers, it was adorable!

Whether you have always been a fan of the movie, or if you are like me and are not such a huge fan of the movie, you have to go check it out! It would be such a fun family night out on the town! I saw one little girl crying as she was leaving because she was sad it was over! Don’t miss out! You can catch the show here in Phoenix through February 9th or check this schedule to see if it is making a stop in a city near you!

ASU Gammage has a fantastic line up of shows coming up this year. You can view their season line-up and purchase tickets here.