I received samples of these games for review. All opinions are my own.

I’m an avid board game player. However, finding quality two player games has always been a challenge. There are not many games that my husband will play when it’s just the two of us. I got to try out several new games from Rio Grande Games, and found new favorites to play with 2 (or more) players! 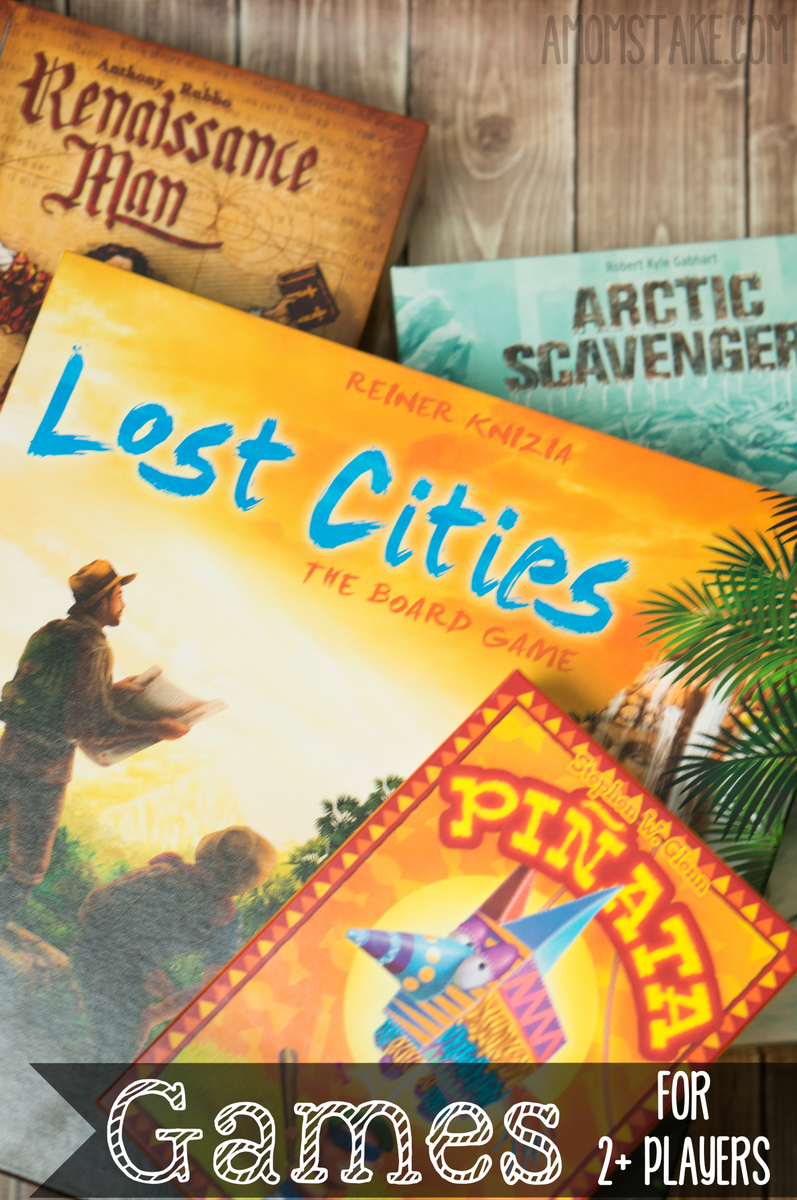 I love playing games, but roping my husband into playing a game with just me has always been a challenge. I can’t blame him, it is really hard to find fun 2-player games that work well. We have one 2-player game that we do like to play together that is a challenge and fun with two, Lost Cities. When I saw that this awesome game for two was now available as a board game for up to 4 players I couldn’t wait to give it a try! 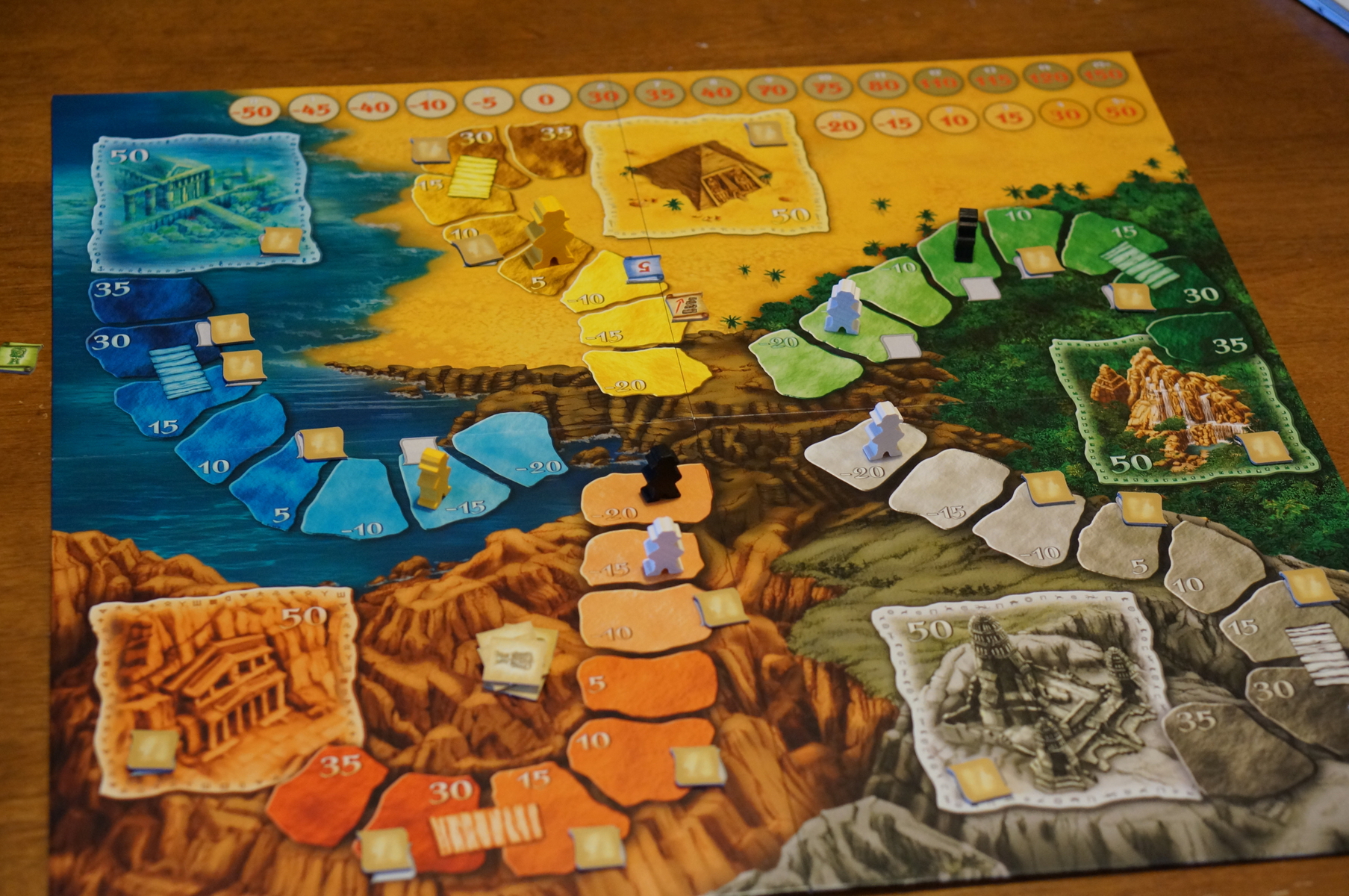 In Lost Cities Board Game, you take the basic mechanics of Lost Cities of collecting and playing your numbered cards in ascending orders. Each path you start on begins with negative points so you have to balance starting a path and actually having enough cards and turns to be able to make it to positive points. I thought this game was a great transition to playing with 3 or 4 players. It kept the same feel of the 2-player game while upping the competition by adding more players.

I was thrilled to try another 2-player game, that didn’t disappoint at all! In Pinata, you try to smack the pinata and collect the candies inside. It’s based on a really cute theme that feels very true to theme. You play either high cards or low cards depending on the card in play. The lowest or highest, as applicable for each of the pinatas. Once the candies are collected, the pinata gets flipped to the opposite side with high now becoming low and low now seeking high cards. Since there are 5 pinatas in play at any time, there is always a challenge of where to play your cards and which one to race for. It’s a really great game full of challenge and fun to play! 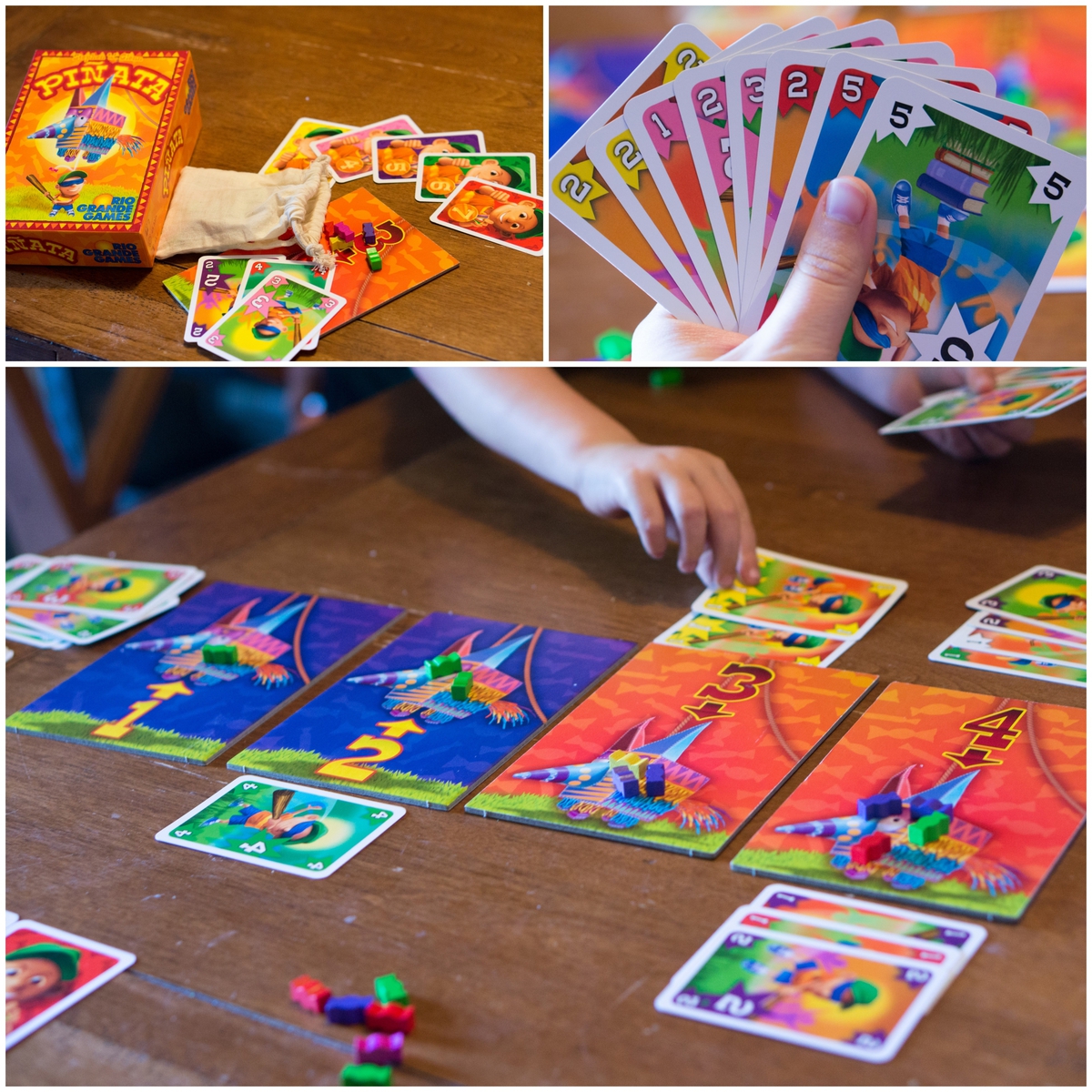 Arctic Scavengers is a deck building game. Now, before you go and write off this game, let me tell you why it’s unique! I like deck building games, but with Dominion and 7 Wonders in my collection that both give you next to no interaction with the other players, I was a bit hesitant at first to play Arctic Scavengers. In the game, you start with cards which will let you buy other cards to add to your deck similar to other games. However, at the end of each round, you are able to use your unplayed cards to win a battle for a random card from the deck set aside just for these battles. The cards included are all really good, making the battle a really fun and interesting aspect to the game. 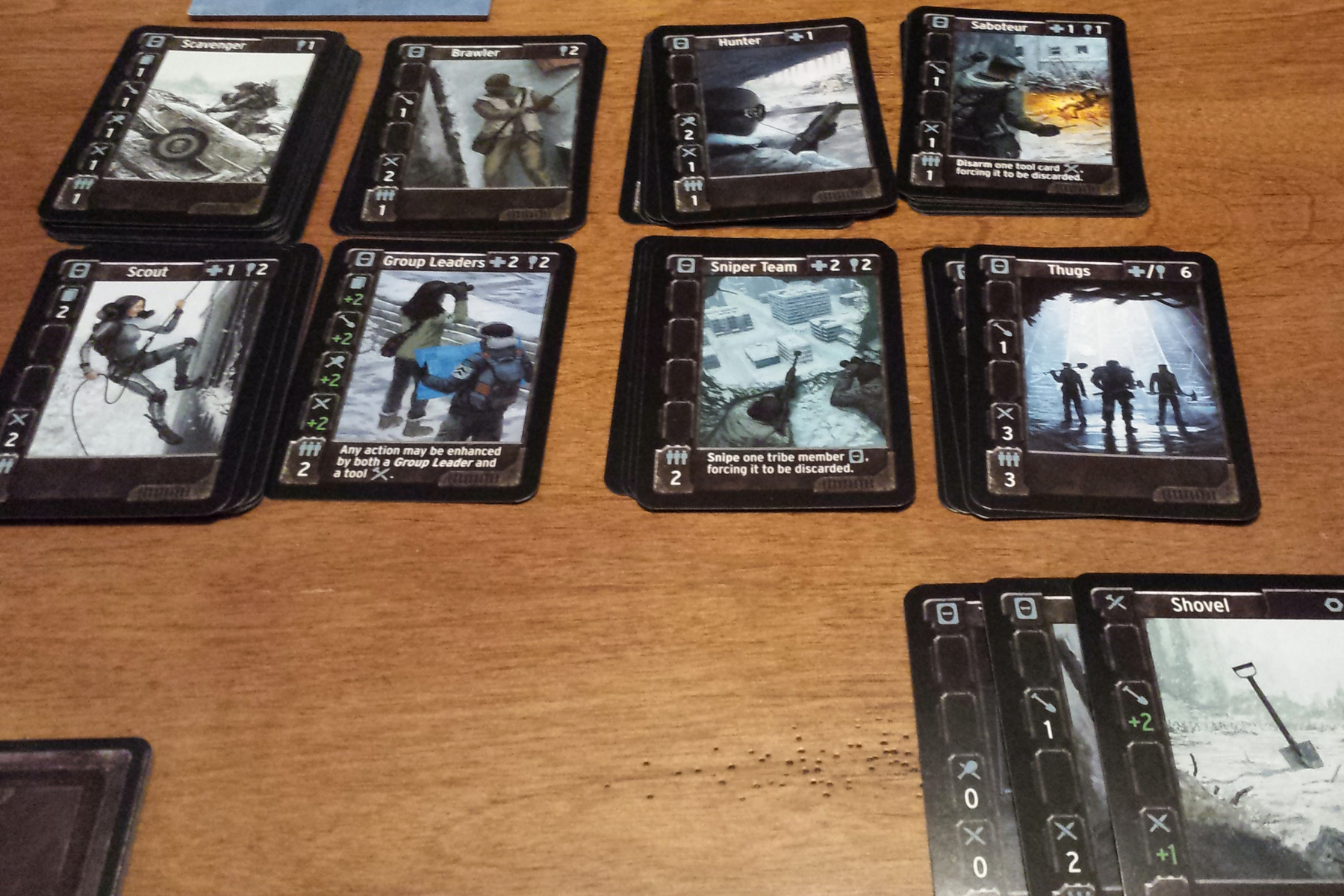 In the end, you win by collecting the most tribe members, an aspect which does come into play a little bit in case of a tie, but otherwise isn’t used for advancing your deck during the game. We had a great time playing this game and loved the competition that was added to classic deck building games.

Renaissance Man is a really unique and fun game! We have pulled it out to play already a handful of times because it is just so different. You start with 5 cards on the bottom row of your pyramid. Each of these cards can be used to give you a different type of action. As you proceed through the game, you build up your pyramid covering lower cards on your tower and eliminating different actions you can take as those cards get covered. It presents a challenge of which card do you cover and when. 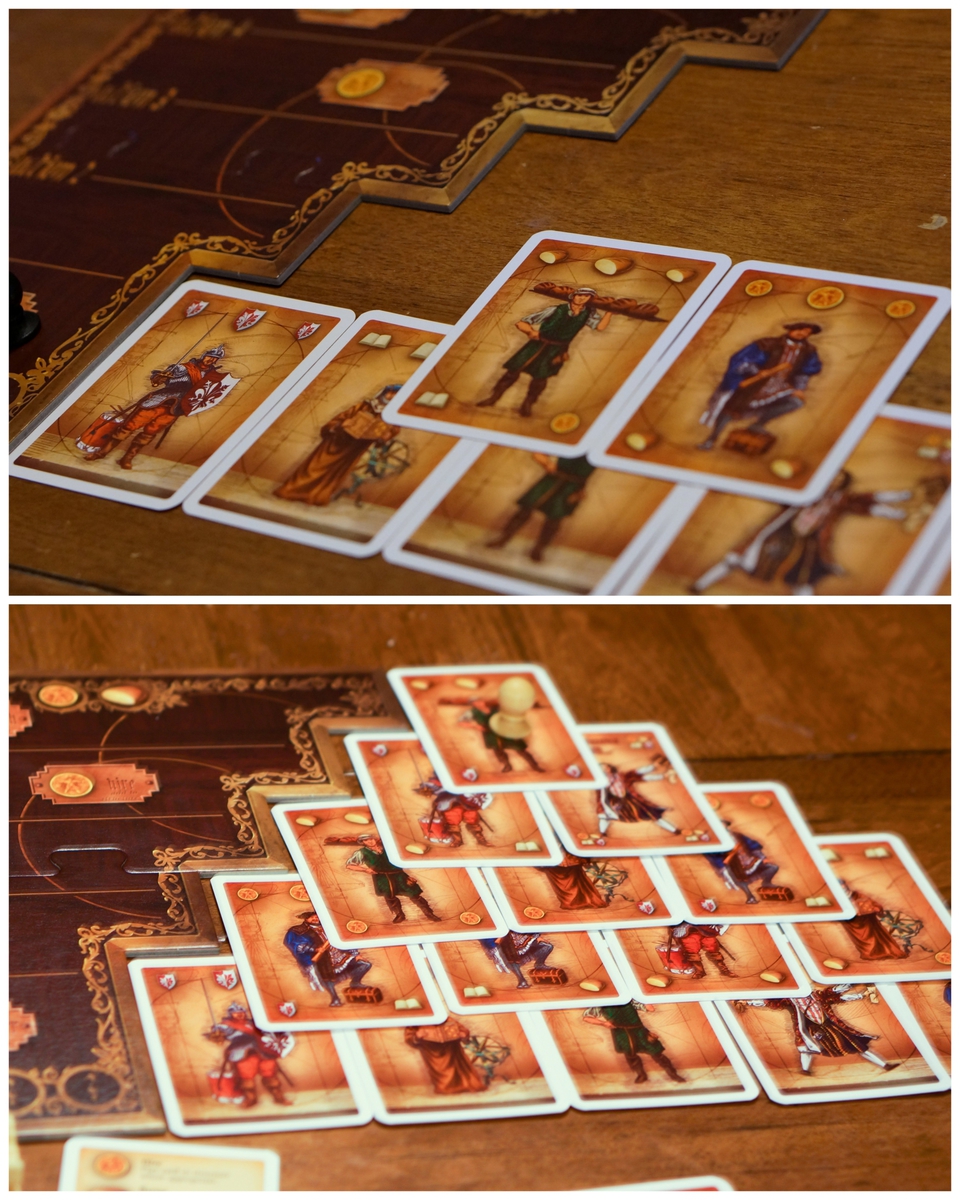 It’s such an interesting concept that you have to cover the actions to move forward in the game but you can’t block the wrong ones or you can get stuck. This game is a ton of fun, but does use a lot of elements of luck tied in by getting the right card by chance. There are a few built in aspects that overwrite some of that luck, but chance does still play a big part.

We really enjoyed all 4 of these games. My initial favorite was Renaissance Man. It’s got such a unique gaming element to it that I really enjoyed it the first 3 or 4 games. I do think it has less re-playability then the other games, though. All of these games have become favorites in their own respects and they play well with two players. Look for these and other great games at RioGrandeGames.com.