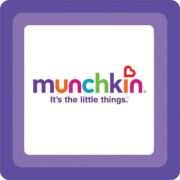 Munchkin, Inc. creates baby products that excite, delight and make life easier for today’s parents.  They always place great emphasis on innovation, redefining what baby products can achieve.  They have won more than 40 industry awards, including multiple wins of the coveted Target® Corporation Partner Award of Excellence and the Toys “R” Us 2012 Vendor of the Year award. They are endorsed and recommended by sleep and safety experts, medical professionals, toy specialists, and parents.

Recently, Munchkin, Inc. won more than $13 million in a false advertising dispute against Playtex.  Read more about it here:

/PRNewswire/ — Munchkin, Inc., leading designer and manufacturer of infant and toddler products, today announced the company has received a favorable jury verdict and a $13.492 million damages award in its false advertising lawsuit against Playtex Products, LLC (“Playtex”), a wholly owned subsidiary of Energizer Holdings, Inc., and maker of the Diaper Genie®.

The jury also issued a defense verdict in favor of Munchkin on all of Playtex’s counterclaims, finding that Munchkin’s advertising claims stating its ARM & HAMMER™ Diaper Pail by Munchkin is “The New #1 in Odor Control—Proven Better at Odor Control than Diaper Genie II and Diaper Genie II Elite in a Laboratory Test” and “Preferred by Moms 2 to 1 over Diaper Genie II in an independent, national in-home study with 100 moms” were neither false nor misleading.

The $13.492 million in damages awarded by the jury in the United States District Court for the Central District of California is still subject to post-trial motions and a final judgment.  Munchkin is pleased with the jury’s verdict.  Munchkin embraces fair and honest competition, which tends to benefit the consumer and improve the level of baby products and services offered in the marketplace.  Munchkin looks forward to the entry of a final judgment so that it can begin its corrective advertising campaign to remediate the false messages by Playtex.

For me, a diaper pail is one of those must-haves as a mom.  I don’t want to run poopy diapers outside constantly.  But my old diaper pail just wasn’t cutting it as far as odor control goes.  After just a year of use, it was a little too smelly for my liking.  The Munchkin Arm & Hammer Diaper Pail has a self-sealing system that seals the bag and locks the odor away.  It also has a baking soda cartridge that absorbs odors.  The refills last a long time, too.  This is a great diaper pail, and it has the awards to back it!

Go buy yourself a Munchkin Arm & Hammer Diaper Pail.  You can find them at Amazon, Target, & Walmart, and they retail for $24.89.

– Rules –
Enter in the Rafflecopter Widget Above! If you have problems using rafflecopter, be sure you are running the latest version of your web browser and have javascript updated. If there is a Mandatory entry, it must be completed before any others will count. Do not attempt multiple instances of entering as all entries will be disqualified. If I am unable to verify your entry, it will not count. Winner will have 48 hours to respond or a new winner will be picked. By entering you agree to the rules of the contest. For more information on entries and how to enter visit my “Contest Entries” page. Good luck!

Disclosure: I received a Munchkin Arm & Hammer Diaper Pail in exchange for my honest review. I was not compensated in any other manner. The opinions expressed above are my own and any claims should be verified on the sponsor’s site.

holds up to 25 diapers brich22 at earthlink dot net

My favorite thing is that it's odor eliminating.

The feature I like best about the Munchkin Arm & Hammer Diaper Pail is the baking soda cartridge.

I like the self sealing lid and odor control!!